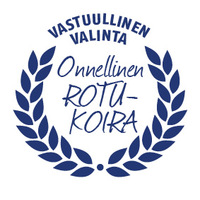 We are a member of:

Little Frost´s Kennel - Who We Are

I am Sari Jänkälä and I live with my family in Rautusjärvi, Lapland Finland. I have completed the basic course for the kennel breeders and signed the Finnish kennel club breeder commitment. You can also find a hunting permit in my pocket :) The FCI kennel name Little Frost´s was established in 2015. I have worked as a member of the board and treasurer of Barbet Finland Association in 2011-2016 and as the contact person for the association's Lapland region in 2011-2017. I joined MyDogDNA as a breeder in 2018, our barbets are DNA tested. We live and play with our dogs in the beautiful scenery of Lapland. In our home we also have chicken, a rooster and sheep in the summer.

My first own dog was the Spanish Water Dog, Zorrazo Karlos "Cora". We picked up Cora from Nummela in Vihti in 2006. Cora was an energetic perro boy and always ready to get involved in everyday life. However, he was of a reserved nature and also shy. A few years later, I started looking for a dog buddy for Cora and then I found a Barbet. There were about 70 Barbets in Finland at the time and no ones at all in Lapland. After looking for a dog abroad as well, in 2010 I ended up in Rymättylä to see a Barbet boy looking for a new home. There I met the dog of my life "Laku" and his mother "Luna". Laku was a 2.5 years old when we met and we immediately fell in love with him. Laku moved with us to Lapland and after that there were both wonderful moments and also exciting situations :)

Our Barbet line started from Laku (Karva´san Paniculatus). His father was Boree Di Barbochos Reiau De Prouvenco and he represented one of the purest Barbet lines. Laku´s mother was French Asio De La Cale Des Rouleaux who was imported to Finland in 2005 by kennel Karva´san. Laku had the one and only litter with Kajs Vita Björnens Kiara (SWE) in 2013. "Halla" girl from Laku's litter moved to us. With Halla, the kennel Little Frost´s was born.

I have at home Barbets in four generations. Although the love for Water dogs and especially the Barbet has won our hearts as a breed, the kennel's background is in more than 20 years of experience with gun dogs, mainly Finnish Hounds.

In January 2018, we imported a Barbet puppy from Elverum, Norway. Viima, who was born on September 18, 2017, is now also with us. Her mother is Swedish and her father Dutch. So she is an international lady with a very interesting pedigree. The kennel also has a Karelian Bear Dog male "Hero", born in June 2018.

We do a lot of things with the dogs. However, the most beloved dog hobby is training with gun dogs and being in the woods with them. We use Barbets for hunting birds, especially as retrieving dogs for ducks. Barbets also have a tendency to point. We also do train Barbets for tracks. We tours dog shows every year.

I grow Barbets on a very small scale in a home kennel. My goal is to grow healthy and good tempered barbets. I really pay a lot of attention to the nature of the dog and maintaining its usability as a flushing and retrieving Water dog. Puppies are delivered to the new homes registered, chipped, dewormed several times and inspected by a veterinarian. The contract for the sale is signed using the Kennel Club's forms. If you are interested in Little Frost's puppy, take a closer look at the puppy page, our breeding principles and the frequently asked questions section.